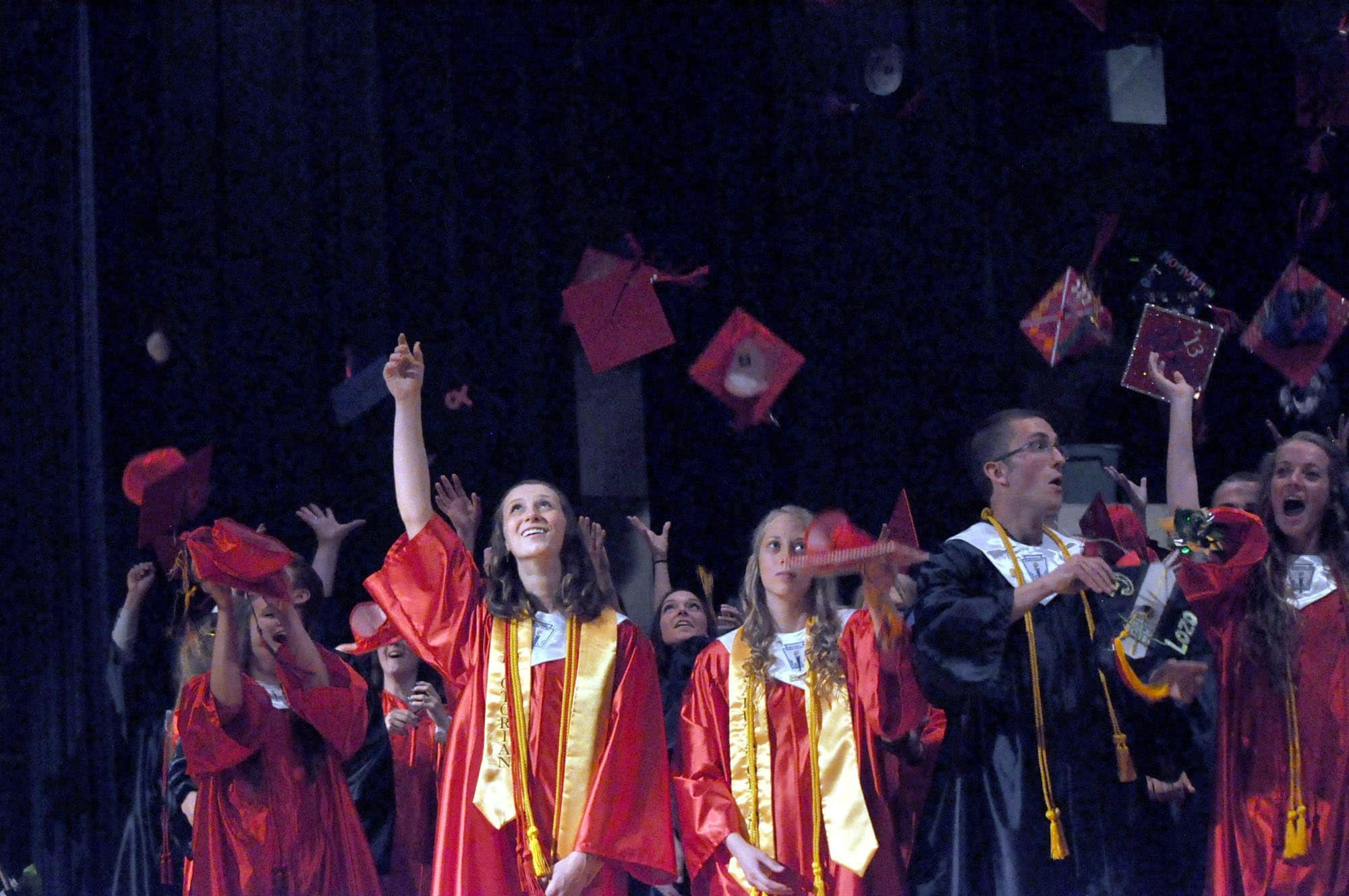 Members of the Sayre (Pa.) High School class of 2013 tossed their caps in the air after graduation last June. (AP Photo/The Daily Review, Brian Fees)
High school teachers often try -- sometimes to no avail-- to convince students that how well they do in school will matter later in life.
Now they have data to prove it. A report published Monday in the Eastern Economic Journal by researchers from the University of Miami found that a person's grade-point average in high school not only indicates the person's chances of getting into college and whether he or she will finish college or graduate school. It could also be an indicator of how much that person will earn later in life.
"A one-unit increase in your GPA has a very sizable impact on your education and earnings," says Michael T. French, director of the health economics research group at the University of Miami.
Indeed, for a one-point increase in a person's high school GPA, average annual earnings in adulthood increased by about 12 percent for men and about 14 percent for women, the report found. (Men and women were looked at separately since women have lower average earnings than men, making about $30,000 on average in adulthood compared with the average of $43,000 for men.) 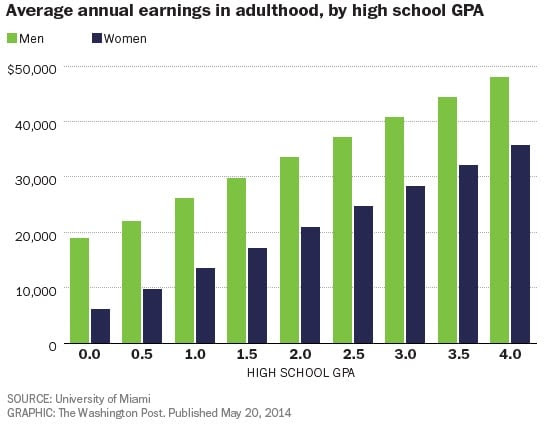 The findings also show that people with better grades were more likely to keep studying after high school. For instance, a one-point increase in GPA doubles the chance for both genders that a person will complete college, increasing that probability from 21 percent to 42 percent. Better grades were also linked to a greater probability of going to graduate school and earning another advanced degree.
French and his team surveyed 4,694 men and 5,525 women between the ages of 24 and 34, or roughly 10 years out of high school, and calculated their high school GPAs based on their transcripts (none of the grades were self-reported).  French says his team controlled for other factors that could affect a student's grades, such as family size, innate ability and the parents' education.
The correlation between high school grades and overall educational attainment was strongest for minorities. African American and Hispanic men were actually more likely to go to college and graduate school than whites with similar GPAs, says French, a sign that minority students with good grades may be more motivated to finish school and advance their education.
However, those higher grades in high school didn't translate into higher earnings for African Americans, which French says could be due to a gap in the opportunities made available to minorities. Some workers may also choose to go into lower-paying fields, he adds.
It's well documented that going to college can improve a person's future earnings, but a separate study released earlier this year shows that the earnings gap between college graduates and high school grads is getting wider over time. Men who were born between 1960 and 1964 and graduated from college earned a median of $802,000 in cumulative earnings by the time they were in their mid 40s, up from $687,000 for men born between 1940 and 1944, according to a report released by the Urban Institute last month. Meanwhile, median earnings for high school graduates fell from $435,000 to $243,000 over that same time period, points out Josh Mitchell, a research economist for the institute.